The Research Rabbit Hole and Its Dangers 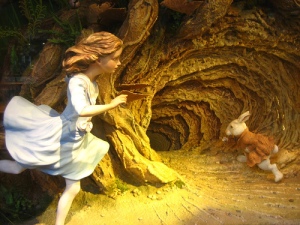 In several of our podcasts Tania and I have discussed the problem of information overload in some of the books we’ve read. I think that it’s a topic that deserves a post of its own as it has been weighing heavily on me lately, both in the books I’ve been reading and in my own writing efforts (such as they are). It’s also loosely related to Tania’s musings on the historical novel.

I am currently reading Olympos by Dan Simmons, which is the sequel to Ilium, a book that I talked about in Episode #8. Simmons is a very frustrating author for me. He writes really compelling stories with great characters and wonderfully realized fictional worlds. He clearly does a great deal of research to do this. Unfortunately all of that knowledge sometimes gets the better of him, and his stories get slightly derailed.  You find yourself asking, “Why is this relevant? How is all of this information moving the story forward?” This is a problem not just with his science fiction but also with his historical novels, Black Hills and Drood. Simmons often bogs things down even further by injecting small essays on literary criticism, history, and even current events into his stories by either disguising it as dialogue, or simply sharing the musings of one of his characters, and sometimes with authorial digressions (a problem we discuss in our podcast about Flagged Victor).  The books are, as I said, very good, and you really want to love them, but this problem keeps cropping up and spoils things a bit.

Simmons is certainly not the only offender. I find it is actually a fairly common problem with science fiction, fantasy, and historical fiction. The authors of these genres have either gathered, or created, a wealth of information that they really want to share with you. The really excellent writers seem to do this seamlessly (Guy Vanderhaeghe’s The Englishman’s Boy, Matt Haig’s The Humans, Glen Duncan’s The Last Werewolf, and Richard K. Morgan’s Black Man, spring immediately to mind), but many otherwise very good writers don’t get the balance and the transparency quite right. Even my beloved Michael Chabon’s really wonderful Telegraph Avenue succumbs to this phenomenon at times. In Chabon’s case it is the huge amount of research that he did on the history of jazz for his novel. It’s an integral part of the story but there are times when it becomes clunky and pedantic.

I can attest to the fact that this research conundrum is a harsh mistress. I have been struggling to complete a historical novel and a science fiction novel, and in both cases I have often lost entire days of potential writing by falling down the research rabbit hole. I’ll simply want to know how much a man my size would weigh on the moon, and hours later I’ll be reading about which potted plants are the best air filters and oxygen generators. Then there is the difficult task of sorting, discarding, and synthesizing all of that info into a coherent narrative. Chabon confesses to the same sort of problems:

Because of this sort of danger, I often think about following the example of authors who do little or no research for their books. Patrick deWitt’s only source of research for his amazingly good The Sisters Brothers was an old picture book about the California Gold Rush. DeWitt’s novel certainly never gets bogged down in historical information, but it still manages to feel authentic. It’s hard to know which way to go.

I’m half afraid that this post has fallen victim to the very thing it is discussing, so I will conclude with this rather lame conclusion. Which leads us to a topic for another day: Great Novels with Bad Endings.

1 Response to The Research Rabbit Hole and Its Dangers