Graphic Novels from the Great North

The WriteReads podcast is based in Edmonton, AB, Canada and coming up this weekend is the Edmonton Comic Expo! In honour of this auspicious event, and as a huge comic book/graphic novel fan, I (Tania) thought I’d post about some Canadian graphic novelists. These authors are pretty big, so if you read a lot of graphic novels, you’ve probably heard of them. My hope is that this post might introduce novel readers to another form of CanLit, and that it might inspire the graphic novel aficionados to post about the authors I’ve missed out on, thereby leading me to new reading. The authors’ names are all links to info on them.
I’m going to admit right off the bat to a glaring gap in my knowledge in that I have yet to read all of Hark! A Vagrant. It’s been so highly recommended, we should all go out and read it.

Okay, so far Chad does not have his own graphic novel out, but it’s only a matter of time. Chad and I go way back and I have always thought his artwork was amazing. He’s extremely busy and getting a lot of work so I’ll post a piece of his up here so you can all see how awesome he is.

I wanted to put a little blurb here on Brown’s books as I myself find them a little too dry for my taste, but I love the artwork and I feel there are certainly readers out there who will enjoy him.  He has written several books, though I would say the most talked about is probably his graphic novelization of the Louis Riel story. And it really says something that I actually enjoyed this book, as I was in French immersion and we had to re-hash this particular historical puppy over and over again until I was      pretty darn sick of it.

O’Malley is the creator of the very famous Scott Pilgrim series. I am not a big fan of manga

size comics – my own personal issue, I know –  and I do find that the art style in these novels is not really my bag. However, there are many things I adored about this series. I love the mix of the real and the surreal as O’Malley blends the action packed with real world scenarios, giving the stories punch and humour. But the biggest win in these novels is the idea behind them. A story where the protagonist meets a girl and then has to fight all of her exes (who happen to have super powers) as a representation of how we all have to fight through our partner’s (and our own) baggage? Pure genius. 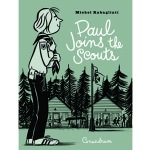 I’ve only read a couple of the books in the Paul series, but it only takes one to make you a fan. The series recounts the story of Paul as he goes through the different stages of his life. In Paul Joins the Scouts, Paul (age 11-12) joins the Scouts, against a backdrop of the FLQ movement in 1970s Montreal. I love how Rabagliati weaves the history into Paul’s life, how the movement was clearly confusing to him at that age and how, though his own inner life and social circle are certainly at the center, that outlying political backdrop (and his parents’ reaction to it) still pokes its way in . Paul Has a Summer Job is a more personal story, of his first job and his first time. I read these in the English translation, which I think is very well done, but I’m going to read them in the original French, nonetheless, as I can see where some finagling had to be done to get the pop culture references to fit. What I would like to impart about these novels is that they are beautiful representations of the human experience . Rabagliati is clearly nostalgic, and that comes through, but not in a bad way. With a deft hand, he deals with all big and little emotions of growing up and I can’t wait to see how he deals with adulthood – I have the books already on hold at the library.

also writing Green Arrow and Animal Man for DC comics. I could just write, “he’s awesome” and be done with it, but I want to mention The Underwater Welder and Essex County specifically in this post. While I mention above that Rabagliati represents the human experience, Lemire (with his original characters) tends to explore not just the human experience, but the Canadian experience as well. Call me crazy, but the stories that really hit me as Canadian are ones that involve our landscape. Lemire’s work in the aforementioned two novels deals with our landscapes and hockey, how much more Canadian can you get? When I first started reading his work, the unique

quality of his artwork really hit me, he has a way of making the ugly look beautiful…I really can’t describe it. The Underwater Welder is about, you guessed it, an underwater welder in Nova Scotia who is about to embark on a new adventure and is held back by the ghosts of his past. Lemire’s representation of the small town, of the ocean and how it holds sway over the people who live near it, is just incredible. Essex County consists of 3 different storylines surrounding in the interconnected lives of different characters in Essex County. Here again, the landscape is fully represented and I found there was a beautiful contrast of the farm landscape VS. the city landscape of Toronto. Both books show amazing depth both artistically and in the psychological representations of their characters. Just go out and read them already, will ya?

A Canadian book club podcast that will change the world of literature forever.
View all posts by writereads →
This entry was posted in Opinions, Tania. Bookmark the permalink.

1 Response to Graphic Novels from the Great North